Leap Into This Leap Year with 29 Fun Facts About Bananas

Leap Year is upon us, and Leap Day, February 29 Organics Unlimited would like to present you with 29 interesting and fun facts you may not have known about bananas. Did you know that the average American consumes over 28 lbs of bananas each year? It’s true!

Read on for 28 more banana facts:

1. One of the quickest ways to cure a hangover is to make a banana milkshake, sweetened with honey.  The banana calms the stomach and, with the help of the honey, builds up depleted blood sugar levels while the milk soothes and re-hydrates your system

2. Bananas have a natural antacid effect in the body, so if you suffer from heartburn, try eating a banana for soothing relief

3. Wild bananas originated in Asia and have been cultivated for more than 4,000 years

4. Bananas are great for athletic and fitness activity because they replenish necessary carbohydrates, glycogen and body fluids burned during exercise

5. Did you know bananas float in water?

6. On each stem, ten or more bananas growing together are called “hands” and a single banana is called a “finger.” Four to six bananas sold in the retail store are called a “cluster.”

7. Eating a banana can cheer you up. Bananas are the only fruit to contain the amino acid, tryptophan plus Vitamin B6 which together help the body produce seratonin, the natural chemical which alleviates mental depression (It’s also found in Prozac), that’s why we call them “nature’s good mood food.”

8. Bananas love a tropical climate but they are even grown in Iceland, in soil heated by geysers.

9. Bananas are one of the few foods to contain the 6 major vitamin groups. Perhaps the reason bananas are so nutritious is because the banana plant is in fact a giant herb.

10. Bananas got their name from “banan,” the Arab word for finger

11. Bananas are one of the few fruit that keep ripening after they’re picked, which is why they’re harvested when they’re green

12. The banana peel contains the finest natural lubricant known to man. In fact, it can substitute as a polishing rag for leather shoes

13. Brisbane holds the world record for the longest banana split ever made: a giant 7.3 kilometres long!

14. There are over 500 different types of bananas. That means if you ate a different kind of banana everyday, it would take almost a year and a half to eat every one!

15. As bananas ripen, the starch in the fruit turns to sugar. Therefore, the riper the banana, the sweeter it will taste

16. Bananas were officially introduced to the American public at the 1876 Philadelphia Centennial Exhibition. Each banana was wrapped in foil and sold for 10 cents. Before that time, bananas came to America on the decks of sailing ships as sailors took a few stems home after traveling in the Caribbean

17. In 2001, there were more than 300 banana-related accidents in Britain, most involving people slipping on skins

18. In Eastern Africa, you can buy beer that is brewed with bananas

19. In the 15th and 16th centuries, Europeans knew the banana as the “Indian Fig”

20. The phrase ‘going bananas’ was first recorded in the Oxford English Dictionary and is linked to the fruit’s comic connections with monkeys

21. To avoid those strings, peel the banana from the bottom up. The strings are called phloem (pronounced FLOM). They help distribute nutrients to every part of the growing bananas

22. The scientific name for banana is musa sapientum, which means “fruit of the wise men”

24. Those keen on natural alternatives swear that if you want to kill off a wart, take a piece of banana skin and place it on the wart, with the yellow side out. Carefully hold the skin in place with a plaster or surgical tape!

25. Plantains are a type of banana that are not as sweet and are usually cooked. While not as commonly eaten in the US, plantains are a dietary staple in many tropical regions

26. About 50 percent of people who are allergic to latex are often also allergic to bananas

27. The song “Yes, We Have No Bananas” was released in 1923 and became a huge hit. It refers to the banana shortage at the time

28. Scientists are trying to develop a hybrid, disease-resistant banana

“Quality is never an accident; it is always the result of high intention, sincere effort, intelligent direction, and skillful execution; it represents the wise choice of many alternatives.” – William A. Foster.

Providing quality to your consumers doesn’t just lie in the edible uses of your product. Supplying your customers with a quality product while educating them on the many alternative uses and health benefits can increase over sales and help improve the quality of merchandisingas we stated last week.

Here are just a few helpful tips you can give consumers:

Bananas at any Temperature

Let Your Silverware and Shoes Shine

Fertilize or Mulch with Organic Bananas

For more tips on alternative ways to utilize bananas, including how to tenderize a roast, brighten up houseplants, deter aphids, and more, check out Reader’s Digest!

The Many Layers of Quality 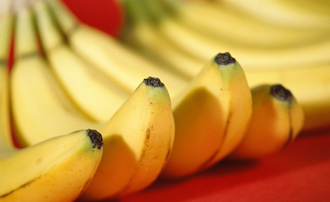 Quality begins with the growing process, but in order to ensure that it is kept to the fullest, quality must be maintained all the way through merchandising in retail outlets. Cap displays lay the foundation for sales and the store’s reputation. It’s simple: If a display is less than exemplary, a consumer will most likely not purchase the product. Although bananas pretty much sell themselves, putting a little extra effort to increase the quality of your merchandising will surprisingly return the favor. Continue reading after the jump.

Eighty-nine percent of all consumers purchase bananas throughout the year. Bananas have a higher potential to sell if a more aesthetic display is offered. Consumers not only want to be informed of a product, they also want choices as well. This means ample shelf space, a variety of color/ripeness and a focus on quality.

The larger the display, the better chance you will have to sell the product. An optimum display would be anywhere between 4 to 12 feet, depending on the size of your store. You can also create multiple displays throughout the store. Placing your produce toward the checkout or near foods that complement your produce will also increase sales.

Sizing, colors and space are not the only components when forging the highest quality of standards for your display. To make your produce stand out, be sure to enable cross marketing efforts. Any kind of signage or informational collateral that consumers can take away from your display will also make the product stand out. These can range from simple recipe cards to lifestyle displays.

Ensuring quality doesn’t stop when the banana has finished growing, it ends when the consumer has picked out what they want and has left satisfied with their purchase.